I remember dreaming as a kid that one day I would be somebody. Not just anybody, but.. 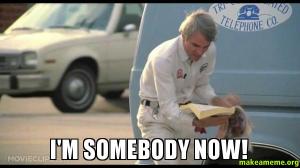 I know you know what I mean. I think we all had dreams of being that ‘somebody’ one day. In my case, I’m not really sure what happened (well, that’s not true, I have a pretty good clue what happened), but somewhere along the way of going from that ‘somebody’ dreaming little boy to the full grown adult, I lost a lot of those dreams to the what I call ‘The Curse of Adulthood’.

Now, I’m not saying being an adult is bad. I’m saying that my experience in becoming one and watching other progress through the same trek has left me with the thought that somewhere along the line, we are suppose to give up on chasing the dreams and ideas of our youth and figure out how we are suppose to fit into the cog of ‘being an adult’.

What’s being an adult anyway? It ranks up there with the command “act your age”. Seriously people, who is this secret council that says at a certain age you should act this way, and where is this manual that everyone who says is referencing?

When I was a kid, I dreamed of being a writer, publishing my first book by the time I was 20, being a millionaire by the time I was 25. Or a professional baseball player and getting out on the field under the big lights and just crushing a home-run. I even dreamed about being a world famous singer. (ok, the only way anyone would ever pay me to sing is if it were the only means to save the planet from an alien invasion)

I gave up on my baseball dream somewhere around high school cause I didn’t think I was good enough, and my writing just became the casualty or a life that got too busy trying to make sure the bills were paid.

And somewhere between being 15 and 30 the rest of my child likeness disappeared. I joined the Navy, fought in a war, got married, had kids and somewhere along the line, suffered “The Curse of Adulthood”.

Somewhere around my 30’s I realized that I didn’t like who I had become. That the child like nature that I had wasn’t something to be lost, despised or hated.. but something to be embraced, cherished and nurtured.

It’s taken quite a few years, and “The Curse” shows up from time to time, but these days, I’m doing better… ish. I have a new set of issues I am dealing with that are trying to bring me back under that curse, but I’m fighting… and one day I actually might become the SOMEBODY I once thought I would be. But for now, I will continue to be the biggest kid that I can…

Because I can never forget one very important piece of information…