A post I wrote two years ago (yesterday) that I happen to see because of a Facebook memory popping it back up into my… um… face.

Yeah… but, edited it, fixed a few grammar mistakes (yep I make those) and figured I would regale you with the 1000 plus words on my thoughts about “hopeless romantics.”

Thoughts from the Front

That person that holds on to the idea that romance is not dead. That clings to the fact that somewhere out there, there is someone who is going to fulfill their every desire and make them feel complete… by the way… thanks, Jerry MaGuire for that one…

But it hurts more to be right.

So I lie about how I feel,

As I hold you through the night.

Knowing it hurts you to be wrong,

So I lie about what’s real,

That you can remain strong.

As if right and wrong are things,

Ever since we put on our rings. 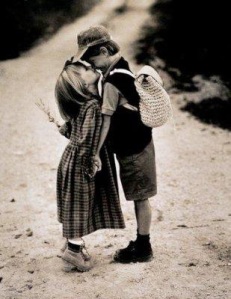 That person that holds on to the idea that romance is not dead. That clings to the fact that somewhere out there, there is someone who is going to fulfill their every desire and make them feel complete… by the way… thanks, Jerry MaGuire for that one…

END_OF_DOCUMENT_TOKEN_TO_BE_REPLACED

So, I was doing some reading the other day and came across John 13:34-35. Go ahead and click on that link if you don’t already have this verse memorized. I’ll wait…

Ok, back? Good. Now, I know this verse is not some form of super revelation or that the heavens opened up, or.. well, maybe they did, but for me, it was actually more like a light bulb that had been dimly lit in the background coming to life and shining nice and bright, illuminating the area where I was standing.

And oh, the junk that was littered on the ground. It was disgusting to me. I sat, in the middle of this filth that I called my Christian walk, surrounded by the darts of judgement, the fecal matter or my expressed opinions about others, and the general dirt and filth that I had collected over the course of time that had been thrown at me that I had in turn, thrown at others.

And in the light of this verse, I realized, that my justification for calling others words like ‘idiot’ or ‘worthless’ or deciding that others were not worth my time or effort just because they happened to annoy me somehow, was just flat out in opposition to what Christ told us.

I was humbled. I was angry with myself. I was mortified.

And then, not two minutes after writing the word ‘idiot’ above, someone called me and did something that made me want to say.. ‘idiot’. Apparently I have some work that still needs to be done.

See, as Christian’s, we are suppose to LOVE one another. And not just those who love us, but those who hate us, those who annoy us, those who we just absolutely know are going to make fun of us.

Why? Cause He loved us first. He died on a cross to make us right with Him while we were still in the middle of our garbage, while we pointed and made fun of Him, while we rejected and said His name as a curse.

If He can do that for us, is it really so much for Him to ask us to do the same for others? Share the love that He gave you when He died on the cross in your place. After all, it is how they will know we are His disciples…

Are you ready to start a revolution?

Ever wonder why it is by loving one another that we will be known as His disciples? I do. I wonder out of all the things that we could be known for, why love for one another? Why not preaching, or witnessing, or the manner in which we present ourselves to others? Why not on church attendance, or devotion time, or prayer time? Why loving one another?

I think I have at least a partial answer.

Every now and again, I sit back and just watch people carry on in their normal fashion. Just observe the way they interact and carry on. One thing becomes abundantly clear very quickly. We are not a very ‘love one another’ king of people. More often then not, we are a very self centered, narcissistic people who can barely get out of our own way long enough to realize that there are other people in our lives.

Normally, we carry on with the attitude of getting one over on someone, or putting someone else down in order to make ourselves look or feel better. Our relationships with people are motivated on what that other person can bring into our life, our how can they make our life easier.

So rare is it to find someone who just cares.

Have you ever seen someone being compassionate toward another person and didn’t immediately bash that person? The guy on the TV asking you to help feed the hungry children in some third world country, or people who pack up stuff and go to impoverished places to help out how they can, or the person who hands $5 dollars to the guy on the side of the road who is holding his sign?

It’s easy to sit. It’s hard to walk. Christ called us to love one another, just as He loved us, so much so, that He gave up everything, including His life, to bring us back to Himself. If we are to be true followers of Christ, then shouldn’t we love each other with that very same compassion and zeal? Shouldn’t we look over the abundance of justification that we have and forgive the wrongs that others have done to us, to get out of our own way, and just to love one another?

Shouldn’t we really be more Christlike?