I woke up. I went downtown to get myself a job…

Wait… that’s not my story at all. But for those few who get that reference…

(Yep, totally said it in her voice too)

Anywho… back to MY Saturday night… a little secret here. I like to color. Yep, I’m in my mid 40’s and I still like coloring. Anyone who has followed this blog for a while probably already knows this. But this last Saturday night, after a long night of conversation (counseling if you will), I needed to kick back and relax (at midnight… so I guess technically, it would have been Sunday, but… eh, who’s keeping track).

So I pulled out my brand new (I bought it two weeks ago) coloring book… correction… GIANT coloring book (this thing is huge) and flipped to the first empty page.

For this one, I wanted to use my crayons. I don’t know why, but the feeling of a crayon in my hand versus the colored pencil was just something I was craving. So I turned on whatever episode of “Community” I was currently rewatching…

And began to color away. 45 minutes and two episodes later, I laid down several severely nubbed crayons (I’m not the only one who hates nubbed crayons am I?) and colored myself done.

So, there you have it. The slightly less than interesting adventures of a middle-aged guy’s Saturday (or Sunday… whatever) night.

So, what did you do interesting this weekend? Please tell me, let me live at least semi-vicariously through your actions… please…. 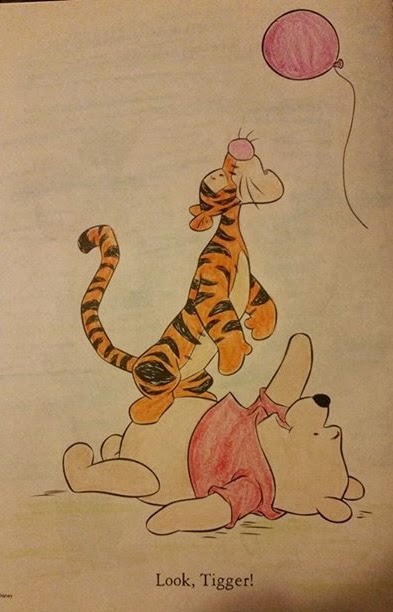