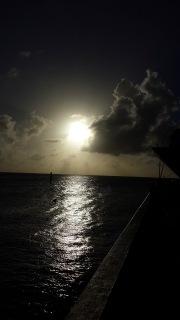 I’ve been in love with the ocean since the first time I ever got underway. Granted, it started out more like a hate relationship, because on that day, the ocean was rough, seas about 10 to 12 feet off the bow, we were headed out of Mayport with our first stop 2 weeks away in Spain. My first time ever on the open ocean for more then a few hours, locked inside a tin can, and that’s when the seasickness started.

Three days worth of bad. I was pretty much useless, couldn’t keep my head up, couldn’t keep food down, and the ship just decided that it was going to make things worse by going straight into those waves. Oh, and just in case you were wondering, no, the Navy does not give you sea-sick day’s while underway, you are still expected to do your job.

But, by day 3, I was able to hold down something, and I started to feel better. (It’s amazing how quickly your body can adapt to a new environmental state).

And that’s when it happened. I went out on deck, felt the breeze and sea mist on my face, heard the rushing of the waves down the side of the ship, and watched the sun set over the horizon, a very landless horizon.

I was hooked. No matter how bad I felt, there was something about standing on deck and just gazing out over that white capped blue expanse that just drew me to a place that I have never been able to find anywhere else.

Oh, the nights were even more spectacular. The darkness just swallowed you up whole, and the stars exploded in the sky like I have never experienced. I would sit out there and just get lost in the moments I had, taking in an experience that I would later take for granted.

This last February, I got a chance to go back out on the ocean, and although this pleasure cruise was different then my Navy experience, the sea had not changed. She was still there, calling out to me, asking me to get lost once again in the sight and sounds of being underway.

And lost is what I got. 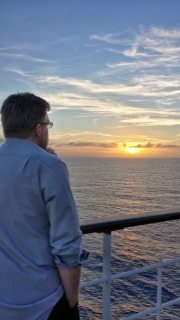 Even if it was for only 8 days.